Join the upcoming Democracy is Europe event in Prague on 11-12 November! 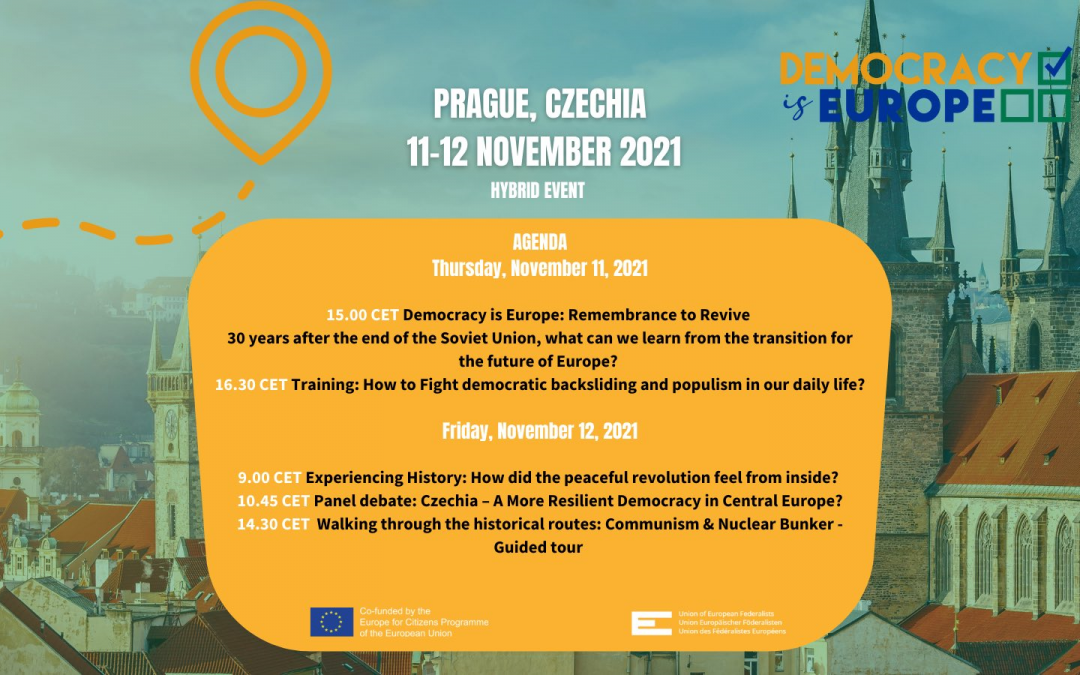 Join the next Democracy Is Europe event in Prague, to learn more on the Velvet Revolution and reflect on the Future of Europe! This two-day hybrid Democracy is Europe event will start with an overview of the path of Czechia in the EU, and it will include a guided tour through the most significant places of the communist period and the revolution – Old Town Square, Narodni, Wenceslas Monument and Charles University.

The second day will start with personal insight into the Czech peaceful revolution in order to better understand why it strove for European values. The following panel debate will discuss the signs of democratic deterioration, Euroscepticism and populism in Czechia addressing current challenges to liberal democracy as well as the question of why Czechia is a more stable democracy than other countries with a Soviet legacy.

A final training session will provide participants with insights into the latest research findings on backsliding liberal democracy in Central and Eastern Europe.

Co-funded by the Europe for Citizens Programme of the European Union and coordinated by the Union of European Federalists (UEF), Democracy is Europe (DEMEU) aims at raising awareness of remembrance, common history and values and the Union’s aim that is to promote peace, its values and the well-being of its peoples by stimulating debate, reflection and development of networks. Its implementation entails a series of 6 local events in countries/related to countries that have seen in 1989-1991 the fall of communism and the emergence of new democratic regimes, specifically in Central and Eastern Europe and the Baltics.