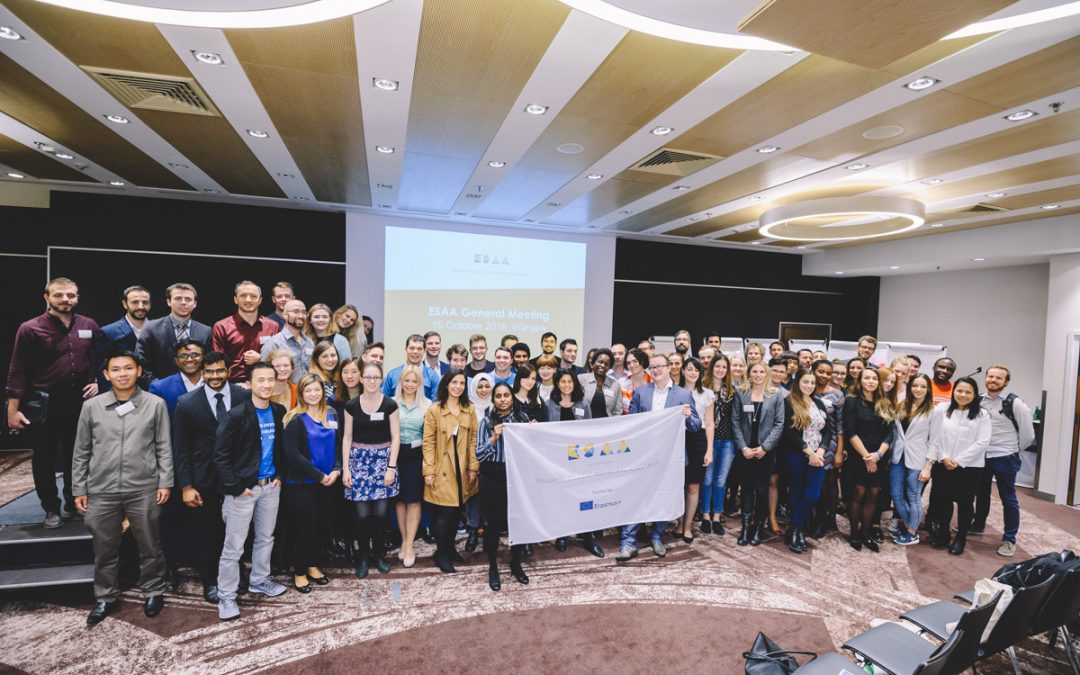 The ESAA (Erasmus+ Student and Alumni Association) General and Working Group Meeting was held in Warsaw between of 13th and 16th of October. ​

The garagErasmus General Meeting participants (that took place on the day before) were invited for the opening day. The garagE representatives of the Working Groups and our ESAA Board Members stayed all weekend to work on the plan for the next few months on developing and moving forward the Association and give even more opportunities to the community of the four member associations, Erasmus Student Network (ESN), garagErasmus Foundation, Erasmus Mundus Association (EMA) and OCEANS. Special times ahead of the Association as next year is the 30th Anniversary of the Erasmus program so the weekend was around this topic mainly, but other very important questions and issues emerged, and were discussed.

The first day was opened by the Co-Chairs Pavan Sriram and Vivivana Permazzi outlining the aims of the Meeting, mentioning the progress that has been made so far and the goals for the next few months. For the new participants, Edlira Alku draw up the history of ESAA, mentioning the events and meetings that took place since the foundation of the Association. ​

The next point on the agenda was the introductory speech given by Adrian Veale, the European Commission Directorate General for Education and Culture, in which he welcomed the members of the umbrella association. He referred to the Erasmus+ program as one of the tools that Europe has so to tackle the challenges that are being faced and emerging on a daily basis, especially in shaping a new narrative for Europe, based on high quality education and common values.

After a coffee break, which are always a good opportunity for networking, the participants were divided in five working groups, discussing different topics. After the workshops, the groups outlined the results of the discussions around the given topics:

The last group brought up thoughts about the impact of mobility on the professional life of alumni, such as changing and shaping the perspective of people that can be applied in the professional life. The conference closed with a panel session which discussed mainly the upcoming 30th Erasmus anniversary and the plans ahead of the European Commission.