gE supports the organisation of 17 events promoting the COFOE

by garagerasmus | Feb 24, 2022 | Conference on the Future of Europe, EUth Pages for Europe, Grassroots Events | 0 comments 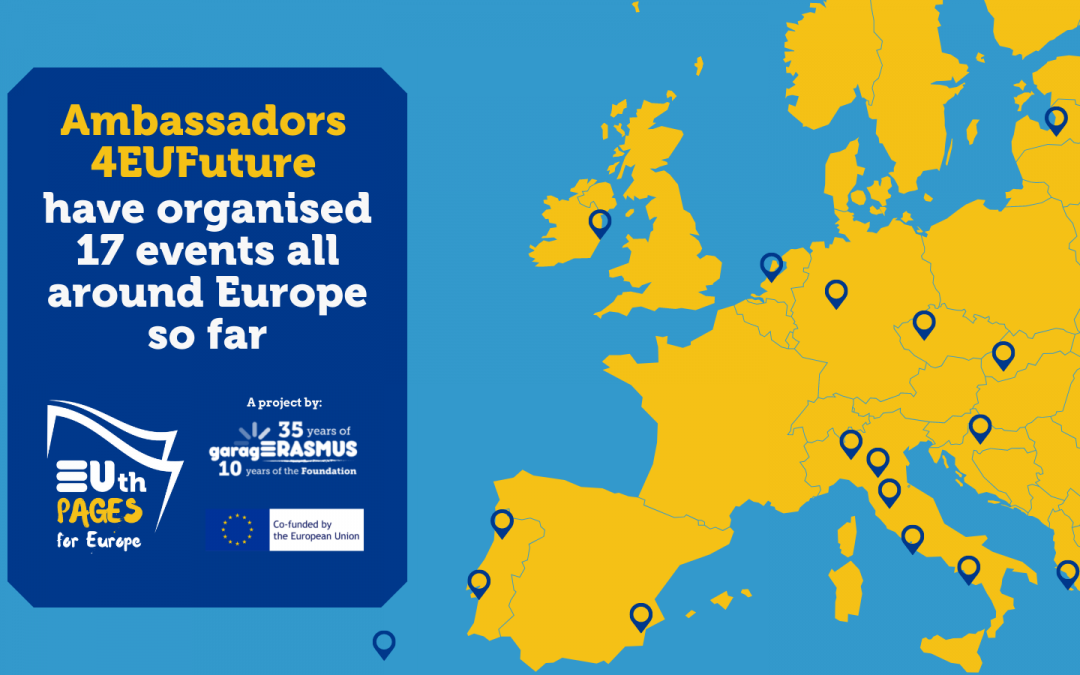 Our EUth Pages for Europe project, co-funded by the European Parliament, is slowly coming to its end. Up to 17 events have been organised in Czechia, Italy, Spain, Portugal, Ireland, Greece, Latvia, Germany, Slovakia, Croatia & the Netherlands, and during the next few weeks additional ones will take place in other EU member states such as Bulgaria.

A regular follow-up on the Conference is held by gE team, with 7 policy analysis published during the last three months of the year on topics such as Youth Involvement in the COFOE, the EU Green Deal, the European Universities Initiative in the context of the European Education Area or the EU Digital Agenda or the EU Health Union. The COFOE’s explanatory page in our website counts with over 1.000 visits.

Once all the grassroots events are completed, in April 2022, garagErasmus will organise an event presenting the results of the local events, followed by working group meetings on the different identified youth priorities. A publication including all the recommendations from local events will be released at the end of the process.

The EUth Pages for Europe project

Co-funded by the European Parliament in the frame of the “Youth engagement on the Conference of the future of Europe” grant, EUth Pages for Europe is being developed in all the member states of the European Union and, together with public and private partners. How? By organising a series of activities in order to make the Erasmus Generation have an impact on the Conference on the Future of Europe (COFOE).

Its actions are involving the international and local communities in the discussions about the most important challenges the European Union is facing, with a particular attention to the involvement of youngsters coming from the peripheries and outskirts of cities.