Green light to the Conference on the Future of Europe: ready to kick-off EUth pages! 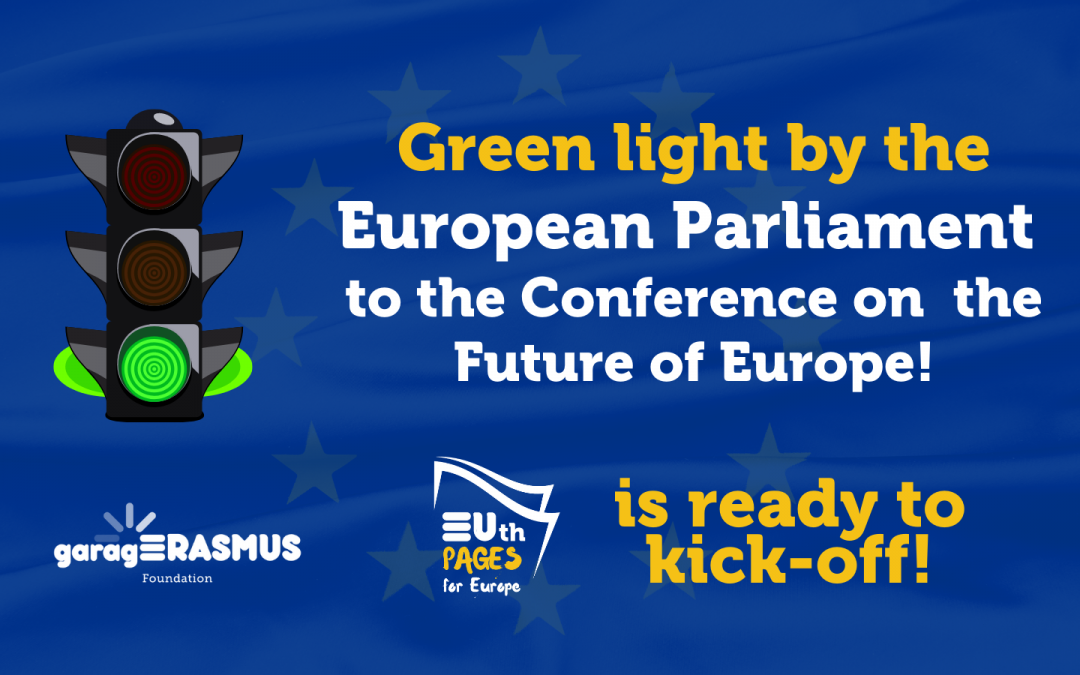 After the formal ratification by the European Parliament’s plenary session on Wednesday 10 March, the Conference on the Future of Europe is ready to kick-off, and will be formally launched in May 2021. This is also marking the beginning of one of our flagship projects of 2021 and 2022, EUth Pages for Europe.

The Conference on the Future of Europe

The long-expected Conference on the Future of Europe (hereafter, CoFoE) aims at creating a new public forum for an open, inclusive, transparent and structured debate with Europeans around the issues that matter to them and affect their everyday lives.

As shown by a special edition of the Eurobarometer, ¾ of Europeans consider that the CoFoE will have a positive impact on democracy within the EU and, furthermore, 92% of citizens across all the EU member states agreed that EU citizens’ voices should be taken more into account for decisions relating to the future of Europe.

Negotiations between European institutions have been long: last week the European Parliament’s group leaders gave green light to the founding declaration ratified at a meeting of the Permanent Representatives of the 27 member states Committee (COREPER). “As group leaders representing the broad diversity of EU citizens, we trust that the European Parliament’s prominent role will be reflected in the work and in the practical organisation of the Conference itself”, EP leaders announced in a joint statement.

The declaration proposes a co-presidency with the heads of the three main EU institutions (Parliament, Commission, Council) and a three-strong executive committee – instead of a single “eminent European personality”, as proposed by the EUCO Portuguese Presidency:  each institution will appoint three representatives. Representatives of the Committee of the Regions and the European Economic and Social Committee, as well as the Conference of Parliaments of the European Union (COSAC), may also be invited to attend meetings as observers.

The Conference aims at listening to the voice of European citizens and reinforcing the EU democratic process. As stated by the EP President David Sassoli, CoFoE will be such a great opportunity to work for a new Europe together with citizens. An opportunity that should not be missed particularly to engage youngsters, engaging them in the European policy making process between the elections.

garagErasmus’ involvement in the Conference: meet our EUth for Pages project!

garagErasmus Foundation will be particularly involved through the process with the development of a series of activities in order to make the Erasmus Generation have an impact on the Conference on the Future of Europe, involving the international and local communities in the discussions about the most important challenges the European Union is facing: the economic recovery after the COVID-19 crisis –particularly striking the Erasmus Generation-, climate change or assuming a leading position at the global sphere.

Our goals with the EUth Pages for Europe project are to offer opportunities to young people to get engaged in a creative process that allows getting knowledge on the role of the European Parliament, European values and rights and shaping the future of Europe, and to raise awareness about the opportunities to be engaged in discussions around the EU, notably through the together.eu platform transforming unawareness into engagement.

How will we proceed?

gE will select one Ambassador4EUFuture from each EU member State. Erasmus+ National Agencies, universities, partner organisations (such as Erasmus Student Network, AEGEE, etc.), and interested stakeholders will play a key role in promoting this call.

After providing Ambassadors4EUFuture with a 2 days training session, gE will assist them in organising at least one local event in their current country of residence, in close cooperation with our universities (foundation members) and our local chapters, the gE4s.

Ambassadors will play a key role in gathering the opinions of local youngsters to sum them up in our final document, the EUth Pages. This publication will include their recommendations and will be prepared in close cooperation with the academic world. The final aim of the project will be to promote the project handbook and to make it available to policy makers, in order to be integrated with COFOE outcomes.