Transnational lists, or how to build a EU demos 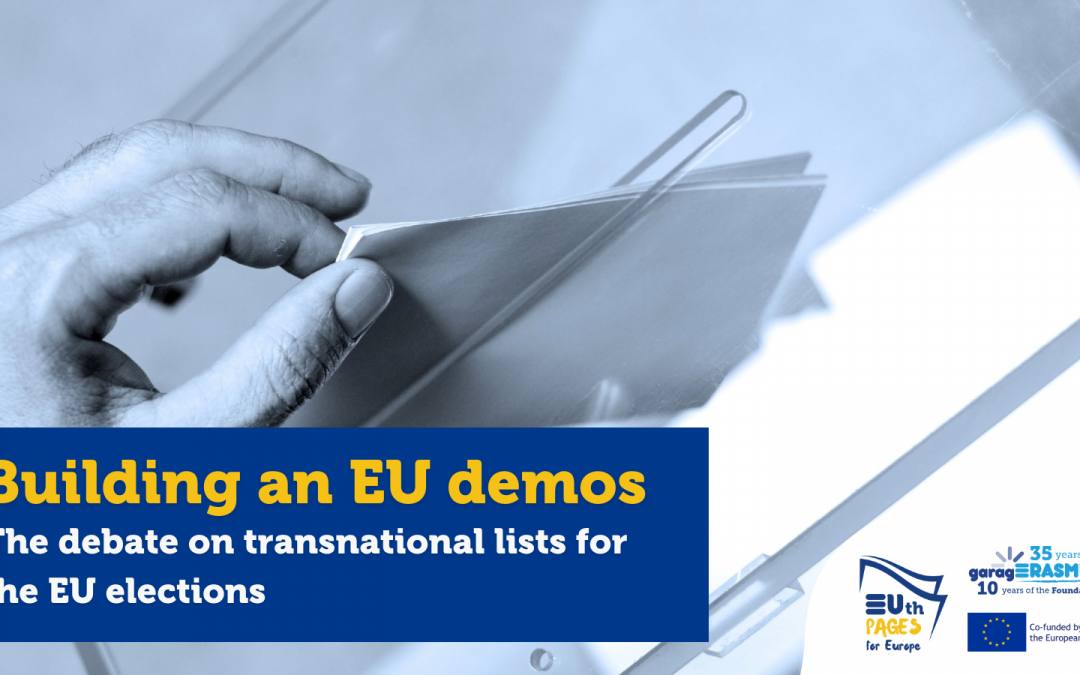 The European debate on transnational lists has been one of the most recurrent ones over the last years, even before the Conference on the Future of Europe (CoFoE).

In fact, there is no such thing as a single European election every five years but 27 national elections (following 27 different election laws) that are taking place simultaneouly in order to select the 705 members of the European Parliament, with each country electing from 6 (Malta) to 96 MEPs (Germany).

Right before the COFOE, the 2019 elections and particularly Brexit already brought back the proposal of transnational lists, as the 73 EP seats left vacant by the British has to be redistributed.

The principle of the current elections and its flaws

It is clear that there is no such thing as an ideal electoral system and a fortiori in a  complex institutional framework as the European one. The current procedures, which are mainly based on the Act concerning the election of representatives to the assembly by direct universal suffrage (adopted in 1976 and amended several times), present a number of critical flaws which have often sparked parliamentary debates.

In short, the current election system does not allow Europeans to make their voices heard sufficiently!

These issues have also been addressed in the framework of the COFOE which could represent a unique opportunity to involve European citizens in shaping our parliamentary democracy pushing for truly pan-EU elections and transnational lists.

What are transnational lists? What would it change in the elections?

The main purpose of transnational lists is to allow voters to vote on the basis of a comparison of candidates’ ideas and political visions, transcending the territorial affiliation and nationality of their representatives.

By having a European transnational debate voters would be brought closer to European challenges. To “Europeanise” the elections, the candidates on the transnational lists would have to address both the voters in their own state and the voters in the rest of the continent presenting projects and programmes that are much more in line with common European targets.

In concrete terms, the adoption of transnational lists would result in an additional constituency to the elections we know today, allocating part of the seats to these lists, European citizens would thus have two votes:

– One to be cast for a candidate on a (sub)national list drawn by national parties (the same way as it this now), and

– One to be cast for a candidate on an EU-wide transnational list drawn by European political parties.

In addition, European political parties should ensure that their transnational lists guarantee fair gender representation and geographical balance in the countries presented on these lists. For example, candidates on a list should have the nationality of at least ¼ of the EU member states (which is the threshold for the creation of a European political group or party) and for every five candidates, no candidate should have the same nationality.

Are transnational lists a good idea?

The subject of transnational lists has been debated at European level since the 1990s and initiatives to introduce them have been rejected several times to date by the oppositions.

According to the latter, the main drawback is that such lists would generate a high risk of misunderstanding on the part of the voter, jeopardising the main objective of “Europeanising” the elections.

Voters could easily be misled and confused by these two separate lists: on the one hand, they will have the impression of casting a ‘European’ vote with the transnational list, but on the other, they will feel that they are casting a ‘national’ vote. Given that the vast majority of seats are allocated by the national list, this will merely reinforce the national character of the elections and thereby ultimately undermine the transnationalist objective.

garagErasmus involvement in the topic

garagErasmus Foundation, with the support of the European Parliament, addressed this issue during the European elections in 2019. We decided to raise students’ interest in Europe and their future as European citizens. To this end, we created the “Erasmus Vote Power” project, which served to provide students on mobility abroad (through various local events in several European countries) with a wealth of information on how to vote properly and to learn more about the European priorities and policies at stake in these elections.

So, in this kind of case, the key is to be well informed at first and then to speak out, to make your voice heard. This is what this Conference on the Future of Europe invites you to do. Thus, if you are interested, we invite you to visit the COFOE website and give your opinion: you can make a difference too!

For more information you can read the EPRS Study “Transnational electoral lists: Ways to Europeanise elections to the European Parliament”, published on February 2021 by Maria Diaz Crego.